Festival audiences were invited to step inside the vintage big top on Wellington’s waterfront and enter a world of enchantment and intrigue with Circus Ronaldo. Executed by a host of performers including three generations of Belgium’s extraordinary Ronaldo family, Circenses brought all the nostalgic romance of the circus back to life in a performance that was both enthralling and eye-opening.

Blending razor-sharp wit and astounding physical skill, Circenses was a show of two very different halves. In act one, half the audience sat around the ring and were treated to a fabulous display of traditional circus skills. Meanwhile, the other half sat backstage where they were privy to a darker and more mischievous world. Then at interval, everyone changed places and all was revealed. Or was it? As in the great circus traditions of curiosity and illusion, everything in this show was not always as it first appeared.

A masterful blend of circus and theatre, Circenses was a unique peek into the unseen realm behind the red curtain.

Designed for both children and adults, it aims to involve parents in the children’s games, creating a fantasy world where size and age do not matter. 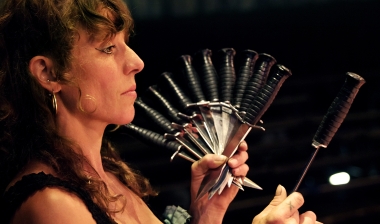